Bio: Luis-Martín Lozano has been director of the Museo de Arte Moderno, in Mexico City, since 2001. He is an art historian from the Iberoamerican University of Mexico City. Guest curator for several museums in Mexico, Spain, Germany, Japan, Canada, and the United States, Lozano is one of the most renowned scholars in the study of Mexican modern masters of the twentieth century. 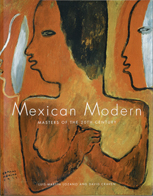 Masters of the 20th Century