Bio: Florence C. Lister for four decades has been involved with ceramic studies throughout the Southwest and the Spanish world. Her late husband, Robert H. Lister, was a renowned archaeologist. Together the two co-authored many books including Sixteenth Century Maiolica Pottery in the Valley of Mexico (University of Arizona Press, 1982) and Andalusian Ceramics in Spain and New Spain (University of Arizona Press, 1987). 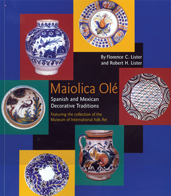