Santa Fe, the City Different, has excited visitors for over a hundred years with its old adobe charm and beautiful light. But this high-desert artists' haven may also be a Land of Light, a premier landscape of sacred sites and spiritual charge. This is an able travel guide, taking you to 111 different locations and their Light temples in and around Santa Fe.

"In New Mexico Light is a retrospective of [Hall's] impressive, varied work. This retrospective reveals the breadth of his subjects, some of which depend on the special qualities the light possess. Because he is a writer, he explains rather eloquently in the text the role of light in his work and the conditions under which he has captured some of the moments.
-Albuquerque Journal

"In New Mexico Light demonstrates Hall's command as a master geneticist and gatherer of visual DNA. For more than 30 years, he has wandered the byways of New Mexico, creating soulful, black-and-white portraits of common folks and cowboys, hippies and healers, poets and politicians. Few subjects escape his keen observation or his insightful interpretation.Most of the 182 carefully chosen images in this book are portraits, but Hall wisely sets off this signature work against an overlay of landscapes so the viewer can begin to place these colorful characters in their natural environments. One of the more fascinating, if fleeting series involves images of passing motorists taken along a long, lonely stretch of highway.Hall's photos span the state, but his richest veins touch on salt-of-the-earth folks from the Espanola Valley, where he lives.Hall accompanies the images with some of the most lucid, engaging essays on the photographic process you'll ever read. He's a straight shooter all the way.Sam Shepard, a close friend of Hall's, contributes the foreword. It's a testament to Hall's ambidextrous, left-brain/right-brain flexibility that he easily matches Shepard word for word.
-New Mexico Magazine

An Academy-Award-winning documentary film-maker and accomplished writer/photographer, Hall boasts an exhibition history longer than the cascading shadows of his New Mexico landscapes. This enduring New Mexico resident has been capturing images of our uniquely American lifestyle since 1965. Uniquely translating our time in history, Hall embroiders his imagery with eloquent essays, drawing upon his Masters degree in creative writing. Accordingly, this photographer is also a poet, an author, and a veritable shaman of contemporary culture. With avid observation of humanity, Hall's photographs represent the inner truth and spirit that resides in peoples from various socio-cultural constructs throughout the Americas. Whether he is focused on the confined dwelling within a prison system, or indigenous elders from across the US, Hall elucidates American iconography by way of the camera and pen.
-Rio Grande Sun 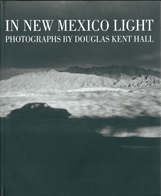