Down Country synthesizes archaeoligical and historical research to create a landmark study of the Southern Tewa Pueblo culture that rose, faltered, reasserted itself, and ultimately, abandoned the Galisteo Basin.

Lucy Lippard's historical synthesis of the Galisteo Basin is a welcome addition to the published writings about New Mexico cultural history. She has written what little is known of the Tano from their mid-thirteenth century beginnings in the Basin to their sad demise in 1782. We sense [Lippard's] deep feelings for the land beyond her windows. By the last chapter, we have shared in her love of home and her appreciation of what it means to inhabit a particular place in this world, and to understand it. She also discusses Pueblo world view, farming methods and subsistence, and varying scholarly interpretations of the Basin's abundant rock art, which is well illustrated in small marginal photographs and line drawings. Edward Ranney's full-page duotone photographic plates, which document Lippard's text, are a valuable asset to the book. They record Classic-period pueblo ruins, archaeological features, petroglyph panels, and Galisteo Basin landscape. In sum, Down Country is a comprehensive, carefully researched, and well-written account of the history of the Tano Indians that will provide a satisfying experience to anyone with a deep interest in New Mexico and especially Galisteo's, history and culture. Equally important, it is a tribute to the vanished people who once lived in the valley where Lucy Lippard and Edward Ranney live today.
-Chronicles of the Trail

"Lucy Lippard takes the reader on an epic historical journey in this exhaustive account of northern New Mexico's Galisteo Basin and the Tano, or Southern Tewa pueblo people, whose roots in this area were established centuries ago. The interdisciplinary approach Lippard employs to weave her story brings a cultural depth and clarity of understanding to this native group and their extended geography, the entire Galisteo Basin that should serve as a model for similar studies. It is told in the clear voice and transparent prose of a skilled veteran writer throughout the chapters historical photographs, line drawings, site plans, thumbnail images, and works by such contemporary artists as Susan Rothenberg and Miguel Gandert reference Lippard's text. Edward Ranney's seventy-three black-and-white photographs made over an extended period of time, add a potent and critical visual dimension to the book which completes the project."
-Fraction Magazine

"a well-researched history of the Galisteo Basin, and by extension, an important general summary of the Puebloan and colonial experience in the Rio Grande. Lippard's obvious passion for the Galisteo Basin comes through in ther rich descriptions of the landscape and environment in which this story played out over the six centuries covered in the volume. The thoroughly researched prehistoric and historical sequence is augmented by Edward Ranney's excellent photography and by detailed line drawings of archaeological sites and rock art images. This is a must read for anyone interested in late Southwest prehistory or in the Spanish colonial period in the American Southwest."
-New Mexico Historical Review 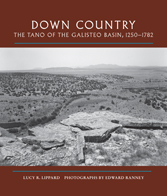