Owl in a Straw Hat

This masterfully written children’s book by New Mexico’s favorite storyteller is a delightful tale about a young owl named Ollie who lives in an orchard with his parents in northern New Mexico. Ollie is supposed to attend school but prefers to hang out with his friends Raven and Crow instead. Ollie’s parents discover he cannot read and they send Ollie off to see his grandmother, Nana, a teacher and farmer in Chimayó. Along the way, Ollie’s illiteracy causes mischief as he meets up with some shady characters on the path including Gloria La Zorra (a fox), Trickster Coyote, and a hungry wolf named Luis Lobo who has sold some bad house plans to the Three Little Pigs. When Ollie finally arrives at Nana’s, his cousin Randy Roadrunner drives up in his lowrider and asks Ollie why he’s so blue. “I’m starting school, and there’s too much to learn, and I can’t read,” Ollie says. “I can’t do it.” Randy explains that he didn’t think he could learn to read either, but he persevered, earned a business degree, and now owns the best lowrider shop in Española! Ollie finally decides he is ready to learn to read. The characters and the northern New Mexico landscape in Owl in a Straw Hat come to life wonderfully in original illustrations by New Mexico artist El Moisés. 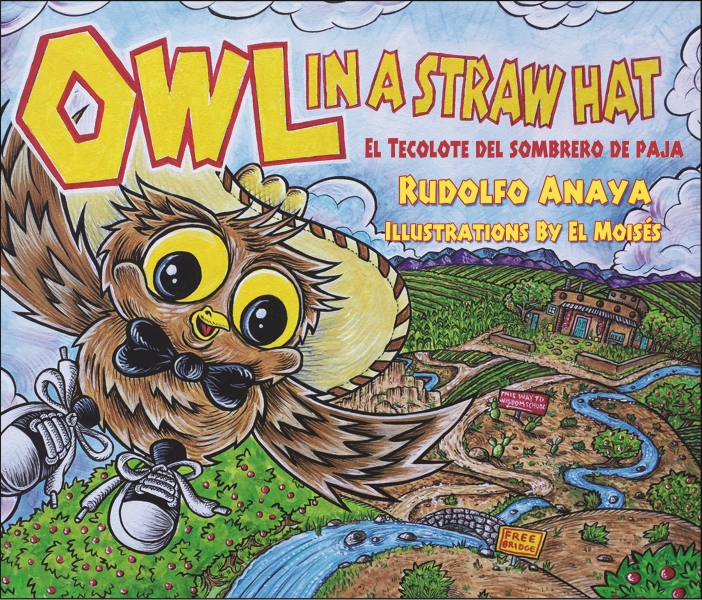