Rudolfo Anaya's The Farolitos of Christmas

With “Season of Renewal” and “A Child’s Christmas in New Mexico, 1944”

This keepsake volume of Rudolfo Anaya's Christmas writings opens with the classic New Mexico Christmas story "The Farolitos of Christmas," newly illustrated by the award-winning artist Amy Córdova. Farolitos is Anaya's heartwarming tale of a beloved holiday tradition, of a promise, and of homecoming on Christmas Eve. This Christmas story by one of New Mexico's best-known authors (Bless Me, Ultima) has delighted children and adults since it was first published in 1987. "Season of Renewal," Anaya's narrative of Christmastime in his native state, first appeared thirty years ago in the Los Angeles Times and recounts Hispanic and Native traditions that continue in New Mexico to this day including reenactments of the revered nativity plays Los Pastores and Las Posadas. Finally, in "A Child's Christmas in New Mexico, 1944," Anaya presents us with a storied poem in stunning verse. It is Christmas morning, he is a seven-year-old boy, and is running through the icy dawn to his neighbor's door to seek "mis Crismes," special treats. That night he and his family walk to midnight Mass where the church choir memorably sings "Las Mañanitas," a birthday song, to baby Jesus. But there is a bittersweet aspect to looking back on childhood's magic from an older man's vantage; the world has changed, the ways of elders are nearly lost, innocence has transitioned to experience. Rudolfo Anaya's Christmas collection is like a snow globe—shake it, then watch as the scene emerges through the orb revealing tradition, family, community, love. This gift from a master storyteller and New Mexico treasure is sure to be loved by children of all ages for decades to come.

The 1987 story of the title returns in a newly illustrated edition, accompanied by a 1981 article Anaya wrote about New Mexican Christmas traditions, as well as a previously unpublished poem recounting his holiday memories during WWII. Luz’s abuelo is too sick to stack logs and light the traditional holiday luminarias (a term that refers to bonfires in this story), which serve as invitations to villagers dressed as shepherds to come sing on Christmas Eve. Luz finds a solution: placing candles into bags filled with sand to create farolitos (which are, somewhat confusingly, commonly called luminarias, as Anaya notes). Córdova uses traces of cobalt blue to subtly outline the figures and objects in her stately, thickly painted images, which have a gentle luminescence that, fittingly, calls to mind lantern light. Ages 9–13. (Nov.)
-Publishers Weekly 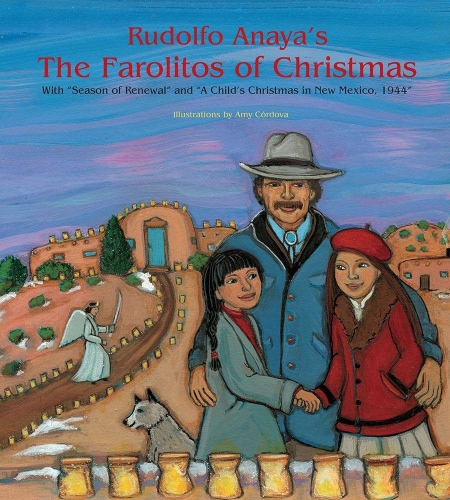