A Generation of Oaxaca's Woodcarvers

Changing Dreams takes a generational look at the fast-changing world of the woodcarvers of Oaxaca, Mexico. These artisans became famous in the 1980s for their colorful novelty figures, a contemporary folk art that Shephard Barbash and Vicki Ragan documented in the book "Oaxacan Woodcarvers". Fourteen years later, beginning in 2004, Barbash and Ragan returned to Oaxaca and discovered many changes in the lives of the woodcarvers they had known. Barbash effectively presents their personal stories in narratives drawn from interviews accompanied by Ragan's arresting black-and-white photographs of the carvers and their lives today. A series of diptychs of the same people taken in 1989-90 and again fifteen years later are accompanied by extended essay-captions on the changing circumstances shaping their lives.

Changing Dreams by Vicki Ragan and Shepard Barbash is a thoughtfully written and provocative book - one which should be of interest to anyone interested in the culture and the sociological changes taking place in Mexico today. The text, written by Barbash, is enhanced by Ragan's compelling photographs, many of them evocative shots that hold their own as individual studies. In short, the book is a sensitive overview of a region in transition that has been movingly presented by this talented husband and wife team.
-Mexconnect 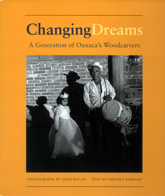