"Tasting New Mexico" celebrates the state's truly distinctive cooking, a blend of Native American, Spanish, Mexican, and Anglo influences, in one hundred recipes from throughout the past century.

"[This] oversized cookbook, designated an official project of New Mexico's centennial, traces the roots of New Mexico cooking much further back than a century. The book opens with a detailed history of the cultural and ethnic influences on New Mexico food from pre-Columbian times... There are dozens of personal, literary, and historical asides in the margins of the 100 recipes the Jamisons have chosen."
-Pasatiempo 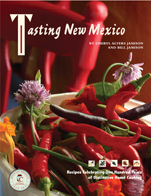