Southeastern New Mexico, anchored by Roswell, Carlsbad, and the Pecos Valley, is a region of towns and ranchlands that has waxed and waned with waves of economic development and decline. The picturesque remains that characterize the nearly abandoned towns and ranches reflect the development that gave rise to the Pecos Valley, beginning with the expansion of the Cattle Kingdom from Texas that brought in ranchers, followed shortly by an influx of farmers who cultivated the land along the Pecos River from Roswell southward. The railroads, roads, and military forts brought subsequent waves of residents seeking opportunity, followed by the discovery of petroleum and sulfur mining. Mechanization of farming and the urbanization of America were the forces that collapsed this always poor region. 285 Broken Dreams is an absorbing survey of an area of New Mexico, though affected by economic downturns and fluctuating populations, has steadfastly survived. Enos presents a varied series of photographs of residences and businesses including abandoned buildings, gas stations, bars, beauty shops, retail stores, motels, and cafes.Historian Elvis E. Fleming contributes an essay about the regions economic waves and population shifts along the highway route. "The photographs provoke many unanswered questions," suggests Fleming, "Who were the people who lived in these houses and worked in these places of business? What were their dreams, and how did they become broken dreams?"

"a book that is at once so lavish and so stark it's hard to know how to talk about the dozens upon dozens of stories untold, stories that may never be known. Over a concentrated period in 2009, Enos photographed abandoned homes and storefronts, gas stations and motels, churches, barns, billboards, and businesses that perished in the latest economic crisis. Statistics mean nothing; they have no soul. But empty buildings, symbols of life that once was and now longer is, remind us that there is a human face to the world in which we live...each of these buildings has its own character, a distinction that might not have been noticed while it was in use. Each one of these buildings is worthy of a portrait, of a dignified epitaph that Enos's photograph provides. Each photograph allows for the building to have the last word, to allow us to really, closely, observe what it is when the end is not the dream."
-La Lettre de la Photographie

"Enos shows weathered billboards with faded 1950s typefaces, the long-extinguished neon signs of motels, the skeletal forms of early 20th-century barns, and empty adobe-esque trading posts and cafes, [but] also reveals more recently forsaken sites... While Enos's photographs tell a story about the way these people lived and worked and what the structures looked like, historian Elvis Fleming tells another story. His lengthy but accessible and poignant essay describes the work that brought them here -- everything from the building of railroads and military bases to the discovery of petroleum and potash and sulfur mining and promises of agriculturally fertile land."
-Pasatiempo

"There has been a lot written about the demise of small towns in the American West. The interstate highways, relief routes, by-passes, and big box stores have done away with small town mom and pop shops on the 'Main Streets' of America. Photographer Chris Enos has put together a book that includes a collection of photographs taken on or near route 285 that give a visual commentary on the aftermath left behind by this cultural shift."
-The Roswell Daily Record 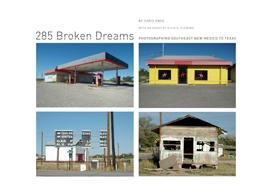